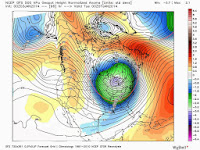 (Dateline: 2456662) Sunday Greetings!  This Morning Edition continues to be dominated by the giant, weird weather gig back in the Midwest.

We will focus on only two aspects of this huge story--football and food.

First, football.  The California Coastal Boyz (AKA: The San Francisco 49ers) are playing AT Green Bay, Wisconsin today.  Kickoff is 2:40 pm Arizona Time, which makes it danged near 5 pm back in The Land of the Cheese Heads.  It looks like Frozen Tundra Fans copped a huge break this afternoon.  The gametime temperature is expected to be a rather balmy high of perhaps 3-5 degrees and the windchill only maybe near zero to perhaps a few degrees below zero.  Those kind of conditions should be a downright yawner for lifelong Packers fans.

There was some talk that today's game could have been the coldest ever played, surpassing the famous Ice Bowl (December 31, 1967) when it was 13 below zero.  Nah, this game will be a walk in the park compared to -13!

This is classic Green Bay stuff here, folks.  Even if you are not a football fan, you really must tune into the pre-game this afternoon to watch the TV cameras zoom in on the fans in the stands.  They will be wearing all sorts of unimaginable warm clothes.  It's going to be a classic sight to see and we won't miss it, even if we have to go to a sports bar to see it.  Packers Fans are the hardest of the hard core when it comes to watching football in the worst possible weather conditions.  Chicago Bears fans come in a distant second place in that dubious distinction.

For a nice generic weather article about the impending storm, see: http://www.washingtonpost.com/blogs/capital-weather-gang/wp/2014/01/03/an-astonishing-dangerous-cold-snap-is-about-to-descend-on-the-u-s/

OK, let's move on to food, shall we.  As you know, I grew up in Lafayette, Indiana, and spent well over half my life in the Heart of The Midwest.  So, what's been going on back there is a generic Food Panic.  It happens every single time there is a Great Big Hoop-Dee-Doo Snowstorm in the forecast.   The TV people absolutely LOVE to scare the bee-jee-burrs out of their viewers.  Typically, if you are watching a local TV channel at a time like this, you probably think this is your absolute LAST CHANCE to survive Armageddon but ONLY if you get to the store RIGHT NOW and buy absolutely everything you can possibly fit into your cart.

I've personally witnessed this amazing phenomena many a time during my life in the Midwest.  It's incredible.  You should see the look in people's eyes.  You can't believe how full their carts are.  Once in Northwest Indianapolis, I saw a full blown fist fight break out in a group of men struggling to get the last loaves of bread from the shelves.  I've seen people crying in front of empty shelves.  It's freaking pathetic.  I once saw a near riot when a bread truck actually made it to a grocery store.  The poor delivery guy actually had to hide in the truck and let the looters ransack his truck.  Better that than get trampled!

Anyway, here is a rather tame article about the Food Gig from my Home Town, Lafayette, Indiana.

As you know, we are no longer using Google News.  This development has caused us to go searching for other news sources.  We've now set our Google Chrome browser to open on the front page of "The Washington Post."  Of course, we are checking out all sorts of other news outlets and media sources but we're going to start each day with the WP.

Why's that?  Well, it's all about Amazon Dot Com and the guy who started Amazon way back in the early dawn of the internet--Jeff Bezos.  Bezos is clearly a genius and has become a billionaire who knows how many times over.  We were quite surprised not long ago when Bezos up and dropped $250-million cash to buy The Washington Post, lock, stock and barrel, as they once said back in the day of flintlock firearms.

We have high hopes that Bezos is going to gradually reinvent the WP and make it a global leader in comprehensive, balanced news coverage.  We suppose the staid old WP is going through a huge sea change with Bezos at the helm.  Naturally, whenever something happens to the owner, you can bet it's going to get covered by the WP, even if it's about Bezos getting stoned in the Galapagos Islands--kidney stoned, that is.

While we may not be very interested in what's going on with the innards of the owner, are are finding the WP headlines far less salacious that those of Google News...and that alone makes it worthwhile to use the WP as our morning gateway page.

OK, moving right along, we will be watching this news outfit pretty closely, too.

Indian Country Today is going to be on our daily hit list as well.  Here's a great article from ICT for your Sunday morning reading:

Most of the High Country News is behind a paywall and unavailable.  However, there are some items available for free public reading.  We got a kick out of this humorous look at Bozeman, Montana.  When we passed through in 2005, it's nickname at the time was "Boze Angeles."

The Voice of America has been around since like maybe George Washington.  You can count on VOA to avoid sensationalizing the news.  You can also count on VOA to help you learn about such esoteric things as "mosquito neurons."  No kidding.

Why would we be interested in Mosquito Neurons?  Well, trust me, mosquito repellent is a REAL BIG DEAL with us.  Bears and mosquitoes own The Best Country left in America.  Us humans need a different kind of spray to keep each creature at bay.  Any news of a more effective and economical repellant for either menace is very welcome news.

In local news, the Camp Verde ALCO is closing:

Nothing of note happening in the Salt Lake or Idaho Falls newspapers.

From Challis, Idaho, we learn:

From the Challis Messenger:

Most of our Dear Friends know of our ten-year Love Affair with the HUB.  (HUB = Helping Us Build).  The HUB is Planet Earth's Finest Thrift Store, bar none.  To know The HUB is to Love The HUB.  Oh, the stories we can tell you about The HUB!  After shopping at the HUB for four summers, we finally got a chance to honor the HUB in late 2007 after we became Director of the Eastern Idaho Retired & Senior Volunteer Program.  Here is the photo album of that memorable day in Challis when we got to shower the HUB Volunteers with the Love they so richly deserve!

And, finally, we will always and forever check in on the Pickles cartoon strip.
Our personal narrative is below these strips from Thursday and Friday.

Yesterday was an incredibly fun day.  We visited three sites here in The Edge of Flat Earth Country.  Marika, John, Chip, Kathy, Jodi, Dexter, Jean and we traipsed out into the hinterlands to view various interesting things that cannot be described in detail here (or anywhere) because of their cultural sensitivity. While we were out and about, we quite literally stumbled into Steve Ayers and his wife doing a day hike with their dogs.  We got to see some really interesting stuff and enjoy some flowing water, too.

Today, I will be taking picture of a flag raising this morning and then rigging for my bi-weekly Guy Gig which takes places tomorrow morning.  Susun will be resuming leadership of her Sunday Stroll and then visiting Betty at Sedona Winds.

Lastly, one of our Dear Facebook Friends is Sue Malone.  We met Sue when we read what you see below on her Facebook sometime this summer.  We were so smitten with her writing, we introduced ourself online and said, "Hey, your'e a good writer!"  We asked Sue to put this on her blog and she did so a few weeks ago.  We decided to put it here because it's such a classic little piece of writing.  We are enjoying Sue's blog as she begins a three month Road Trip that will take her from Oregon to Florida and back.

Well, that's all, folks.  Thanks for reading and Many Happy Cheers!  jp 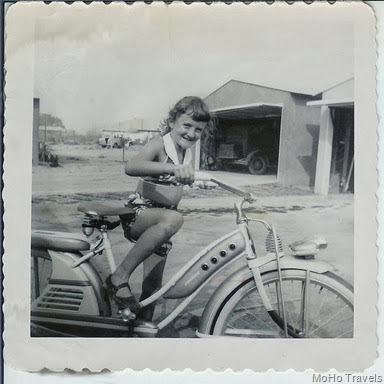 I remember chocolate colored water thick with sticks and rocks hurtling down the wash behind our house during the monsoon floods.      Leaping with a thrill from huge boulder to huge boulder they used as fill to try to stem the flow, which for me was a magic wilderness of danger and roaring water.      I remember the soft bellies of horny toads when you caught them, the sharp prick of stickers in your feet from goatheads...who ever wore shoes?          the smell of dust when the first drops of rain hit after all those dry months.      How incredibly green the San Gabriel Mountains looked in April with the tall candles of yucca backlit against a setting sun. The muted happy sound of kids voices on the playground as I lay on my back watching sky so blue it looked very nearly black.      The milky way and pungent pines of Mt. Baldy on a summer night of camping.      I remember the sweet sad feeling of yearning when the winds blew and the smog vanished leaving behind air that was so sharp and clear that you could actually see the sparkles floating around it in...dreaming of a magic place to live where the air was like that all the time. climbing to the top of the hill in Sierra Madre Canyon, among the prickly pear and agave and morning glory and old live oaks to the digger pine that was high enough to let me see Catalina.      I remember how golden a warm apricot tastes when picked from your hiding place in the tree, and how bitter a surprise an unripe olive can be. ...Childhood in LA in the 50's.... .....Warm as an apricot and bitter as an uncured olive.

If you want to read an interesting book on Amazon.com...try: The Everything Store...it profiles the founder, what and how he did it. Definitely a good read. (I found it at the library--don't know if Amazon has it..hahah)

If you want to read an interesting book on Amazon.com...try: The Everything Store...it profiles the founder, what and how he did it. Definitely a good read. (I found it at the library--don't know if Amazon has it..hahah)

Most enjoyable! Here's a good news source in Japan:
http://www.japantimes.co.jp/
Always something Worldly and sometimes Not!
Love, Stephen

Glad to see you back to blogging. The first time I tried to comment it wouldn't let me. So I had to log into my blogspot to access. Weird. Anyways, glad i'm not sitting outside watching Green Bay play today. And by the way, MountainWest news is a great source of info. I have that on my news feed, too. Keep up the good work.

Finally settled in this evening and had time to catch up on your blog. SF is kicking at the moment....we only have radio...He did it!!!! ok...back to blogging now and reading. Loved all your news links, and then imagine my surprise when my kid photo showed up at the end...I thought I had clicked something by mistake. Thank you so much, John, it is so nice to have someone notice.