So, where are we?

We started the Salmon Thing on May 16th. A couple of days ago the four month anniversary blew right past us.  Here's a short summary.

The website itself has over 19,000 page views and will hit 20,000 in the next 2-4 days. The Halstead Fire article is pushing toward 7,000 page views. Our Google Search Ranking (as shown in the screen clip) is now #6 on the first page of search results. We're sandwiched between a National Geographic website and ranked above the Salmon-Challis National Forest. Amazing but true. 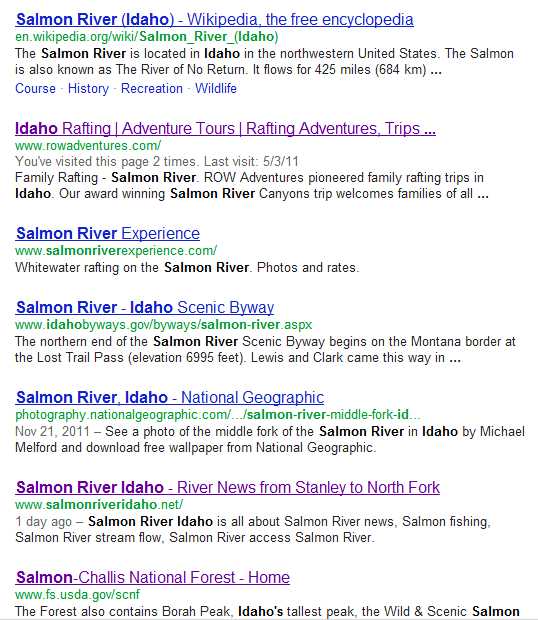 We went from zero Facebook Friends to over 170 and counting.

We did a great article on the new Stanley Library and received kudos from Idaho's main National Public Radio and Sun Valley Magazine. A rumor about the Halstead Fire took off this morning and the Fire Information Public Information Officer called us to ask for advice on how to quell the rumor. We have established our credibility.

We've received over $300 in trade value for whitewater trips and $485 in cold hard cash money for a total take of $785 so far in four months. The cash receipts covered a little more than  2/3rds of our expenses for the four visits to Salmon Country this year.

Not only that, but we took Josh on a whitewater trip and five other days of paddling; plus we were able to spend a total of nearly four weeks this summer in Salmon Country.

We've made a lot of new friends; learned a lot of fun new stuff and are well situated for the future. Although we certainly didn't envision such success in a mere four months, this is precisely where we would have wanted to be if we would have dreamed it to be possible.

We are entering the "off season" in great shape and are well poised for a productive and exciting 2013 Salmon Season during the May-September peak. Meanwhile, we have a full plate and are ready to run the table with a menu of some great upcoming stories. This winter we have already set the stage to compile and review a comprehensive Salmon River bibliography.

We have a robust following of fishermen who visit the website through thick and fin. Currently we are catering to their whims with obsessively Type A detailed coverage of the migrating steelhead as they make their way from the Pacific to the tiny tributaries of the Upper Salmon River to spawn next spring.

Four months after we cranked it up, The Salmon Thing is a Success. Indeed, Life is Good!

Many Cheers, jp
Posted by John Parsons at 6:13 PM

Well-deserved success, John. Thank you again for keeping folks who live in the Salmon River corridor updated on the fires. We came to depend on you to know what was what.