The date December 6, 2001, is a real Red Letter Day for us.  That's the famous day we started our Day Hiking Career by walking around Bell Rock and Courthouse Butte. It's a really long story we will tell tomorrow on the actual anniversary.  Meanwhile, we knew we wouldn't be able to do a hike Tuesday so we decided to do our 10th Anniversary Hike on Sunday, December 4th.  Naturally, our hike yesterday followed in the footsteps of that first hike ten years ago.  Conditions were near perfect, as least as far as we were concerned.  The cold weather, muddy trail and icy rocks kept most other hikers off the trail.  We encountered only six other people on the backside of Courthouse.  Two of them had turned around to head back because one of them fell after slipping on an ice covered rock.  Indeed, the hiking was treacherous in places.  However, the snow made the scenery spectacular and the puffy clouds played tag with their shadows dancing across the cliff faces.  Sometimes hiking in the Red Rocks can make you dizzy with your head spinning in all directions trying to take it all in.  Even if you've hiked the same trail a ba-zillion times, it's different each time, especially under conditions such as we enjoyed yesterday.  The air was as pristine as Arizona air can get.  It was a perfect 10th Anniversary Hike. 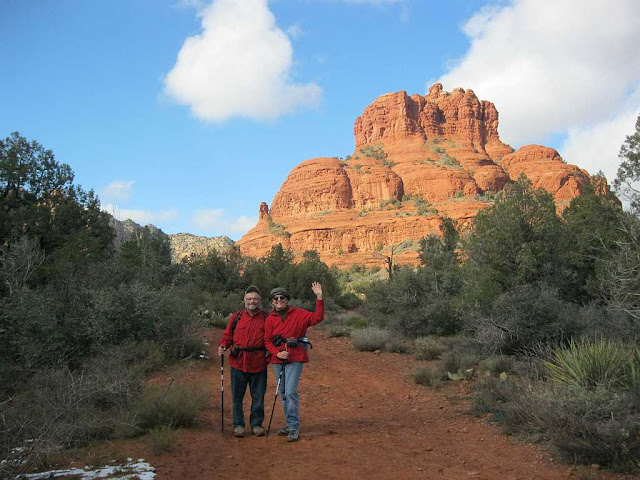 On our way back to the trailhead, a solo female hiker took our picture with one hand
while continuing to talk on her cell phone with the other hand.  Multitasking on the trail, eh? This 4.4 mile trail can be hiked in 90-100 minutes if you're hiking for speed and time.
Today, we took 2.5 hours to enjoy and savor all the splendor.
This trail is always at its best when some people think it  is at its worst. 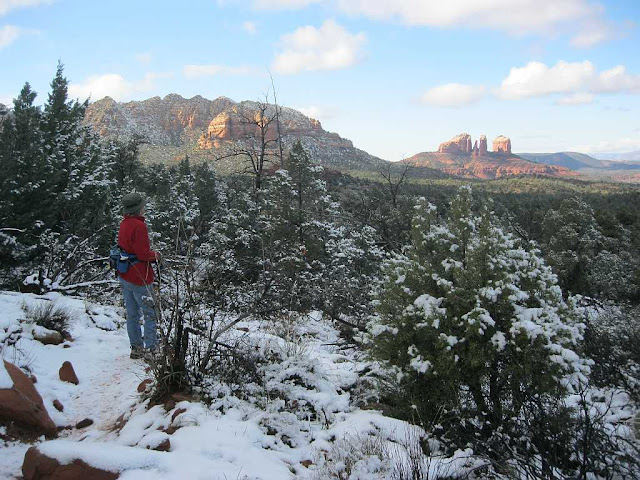 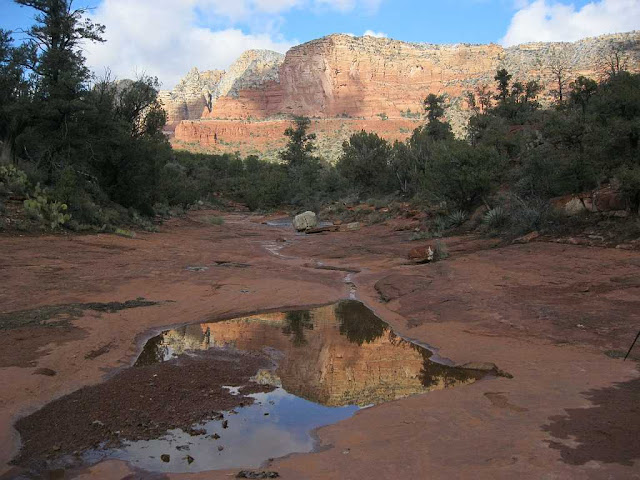 So much to reflect on!
Posted by John Parsons at 8:07 AM

Awesome post and pictures! You two sure know how to live.

you make sedona and the area look beautiful!