Yelling "Fire" in a crowded forest. 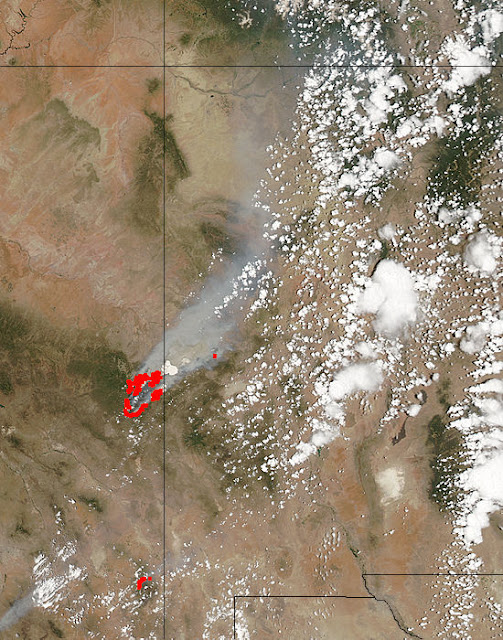 Above is the June 6th NASA satellite photo of the Wallow Fire in Eastern Arizona.  Since then, the fire has continued to explode and, as of this morning, has charred 389,000 acres.  It's lapping at the edges of the Springerville-Eager communities and most people there have already evacuated to safe places west of the fire zone.  The smoke is wafting from parts of Wyoming to Kansas and Iowa.  It's still zero percent contained and will almost certainly become the largest fire in Arizona history.  Thankfully no one has been injured so far and we pray that trend continues.  There are already three Type 1 Incident Teams on this fire.  This is the type of fire that really tests the system's ability to get it under control.  The big question is: "How can this fire be attacked and controlled?"  The answer to the question is obviously very elusive and may not even be known to anyone at this point.  This monster fire has a mind and life of its own and will go where it wants to go.  Wildland fire managers know well enough to keep their crews out of harms way from a fire that can move many miles in a single day.  It's an epic fire and we read the media reports with a sense of amazement and incredulity. Today's Arizona Republic newspaper apparently has a headline that blares, "NO END IN SIGHT."  That pretty well sums it up.
Below is an Arizona republic photo taken from Mars Hill at the Lowell Observatory in Flagstaff.  The Wallow Fire smoke towers above the landscape over 200 miles away! 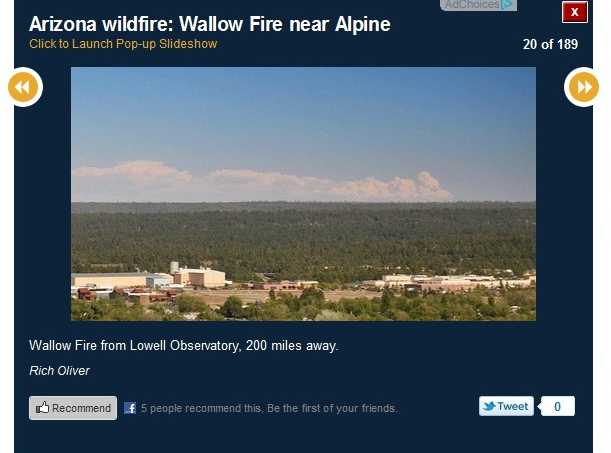 The only thing that can stop this is when it runs out of fuel on the grasslands up north.