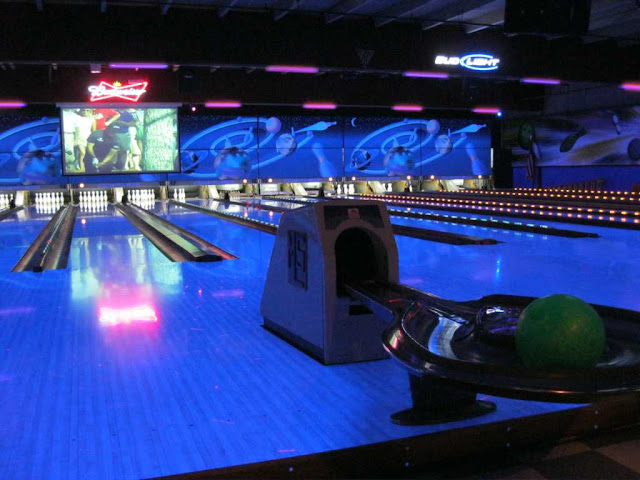 You read that right.  Cue The Dude's favorite word!  Man, it was awesome.  I bowled 12 games.  That's 120 frames. Since I got a lot of strikes today, the total was less than 240 balls.  I probably rolled 200-210.  Since I hadn't bowled in at least 45 years, I was justifiably apprehensive about "outing" myself in public at a real bowling alley populated by real bowlers.  I didn't even know how to pick out a ball or what size shoes to ask for.  The bowler guy behind the counter took pity om me and helped me find a ball that fit my stubby fingers.  It was a green ball.  For "go" maybe?  Naturally, I didn't remember much to begin with and I struggled in my first game to reach 80.  Gee, 80, how embarrassing.  I could feel the smirks of my neighboring bowlers on my blistered red neck.  Well, by Gosh, I decided to buckle 'er down and BOWLER UP!  Game #2 was a 94 and in Game #3 I cracked 100 with a 104.  It kept getting better and I rolled a 118 on teh next game.  This really made me feel great and Game five knocked my socks off with a 153.  Naturally, I became overconfident and sunk back to 112 and 117 on the next two games.  There were other factors, too.  First, they dropped down a HUGE movie screen on my lane and starting showing the Master Golf Tournament. OUCH.  That made it really difficult to concentrate on bowling.  Then, to make matter even worse, the turned off the lights and brought out the psyedelic "cosmic bowling" laser gig and then they double the volume of the hard rock music in the bowling alley. 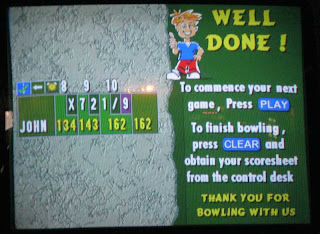 Well, it turns out these Saturday $7, two-hour bowl-a-thons are wildly popular with the Millenials and they were all whooping and hollering like it was overtime in the Super Bowl.  Meanwhile, the young couple took the lane next to me and they were HOT--their bowling balls were on fire.  The foursome on the lane to the right were all rollling games just shy of 200 each.  Well, by Golly and By Gosh, something click off in my brain and I decided to see if I could Bowl HOT, too.  I gave up thinking about things and amped up my ball speed and let 'er rip. (I was first rollilng 10-11 mph balls but amped them to nearly 14 mph before settled into a groove about 12.8-13.2 mph.)  Bowlers on both sides were hooting and hollering for me now. "GREAT STRIKE, GUY," they called out! Strikes and spares starting flying left and right.  I was destroying those pins.  I rolled a 143 followed by a 123-118-128.  My consistency level really inhaled.  I would roll a gutter ball on Ball #1 and then take out all ten pins for a spare on Ball #2.  it was wild.  I was spiking out single pins like I was a professional bowler.  I wasn't going to call it a day until I topped my score of 153.  That HOT hard rock music is the way to bowl.  Those laser lights and that dim alley really rock to the subwoofers of that music.  It's infectious.  I really knew I was going to do well in my last game and started right off with two strikes back-to-back.  I struggled a little in the middle frames but came on real strong down the stretch.  I should have had a 180 on the final game but settled for a 163.  And, on that note, my two hours were expired so I turned in my balls and shoes and left the indoor light show for the one outside.  WOW--That was serious F-U-N!  I can hardly wait to go bowling again SOON!  My overall average for the 12 games was 121.  If you drop the first two sub 100 games the average rises to 128.  The average of the final five games was 135.  That ain't bad for an old guy!
Posted by John Parsons at 5:59 PM

Speaking as the one time Flagstaff Women's Bowlimg Champion (and I have a patch to prove it), a hearty congratulations on your success. My "championship" was a complete fluke. I usually scored 120-140 but during the tournament, I bowled a couple of 180's and took the title. The other contestants thought I was a hustler, I hung up my bowling shoes and put the ball on the top closet shelf, as all good athletes go out at the top of their game.

Love it! Bowling is sooooooo MIdwestern. My parents were both bowlers in that 200 plus echolon. Me, I'm probably like you with it all over the lane between strikes and gutter balls. At least you can drink. And Uncle Buck is one of the great bowlers of all time beside the Big Lebowski and Jesus!

Hey man! That's like totally cool! You the dude!

I used to have to sneak into Green Gables Bowling Alley in Phoenix, as my mother and grandmother were both of the carved in stone opinion that bowling alleys were the hangouts of ne'er do wells, pachucos and loose wimmin. I didn't actually bowl; they were the closest pinball games for a 12 year old on a bike...Boy was it fun!