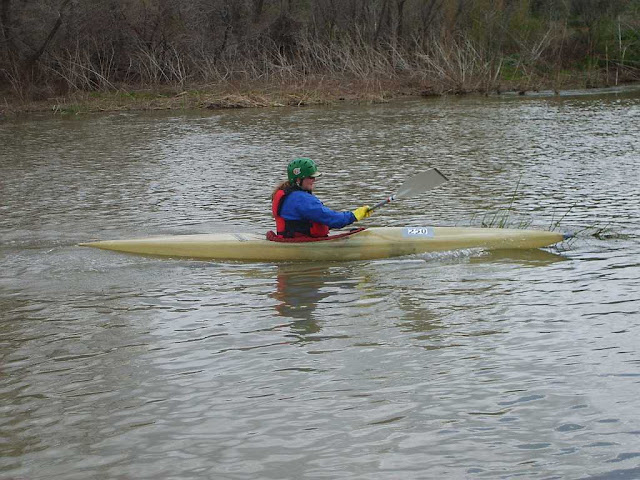 Spudboater really shined today.  Although she finished 2nd in her class, there's quite a story behind her race.  First off, she was entered in "Women's Recreational Solo Kayak."  Spudboater quickly realized she belonged in the expert class and changed categories.  It's a good thing she did because somebody probably would have cried "foul" after being beaten by 15-30 minutes.  Spudboater would have been so far ahead of the Recreational Class.   The woman who won first in Women's Competitive Solo Kayak was paddling a 17-foot ocean kayak with a steerable rudder.  Boats like that are almost impossible to beat with an old 4-meter fiberglass artifact.  Meanwhile, the spray skirt leaked and Spudboater wound up carrying about 40 pounds of water downstream.  Instead of a 32-pound boat, she was paddling a 72 pound boat.  So, the fact that she finished only six minutes off of the winner's time was truly remarkable.  WAY TO GO, SPUDBOATER!  Above, Spudboater crossed the finish line at Beasley Flats. In photo below, Gary and Spudboater pose with Das Boot and her nice plaque that she was awarded.   We took about 70 photos so we will post them up tomorrow.  The party begins in a few minutes so we don't have time to write any more details.  It was a great race and created a story we will be telling around the campfire for years to come. 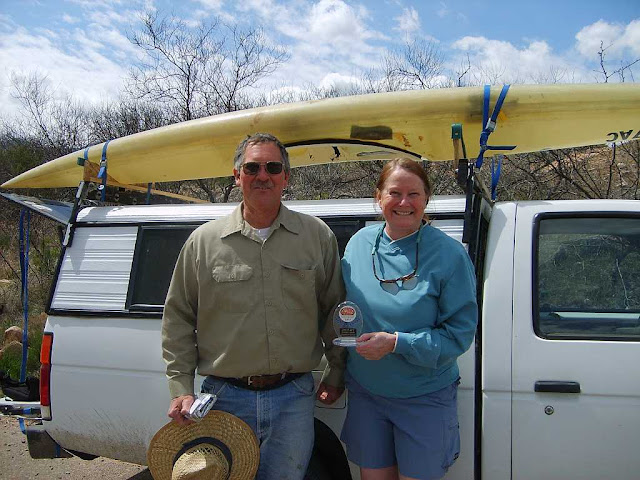 Great summary of the race. (Marti didn't mention the weight of all that water in her post.) Looking forward to more photos....