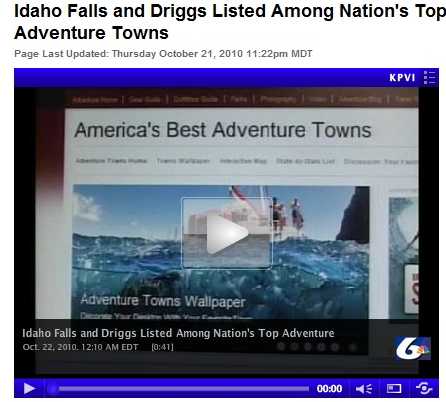 Idaho Falls is one of America's Top 100 "Adventure Towns," according to National Geographic. The list is alphabetical so there's no ranking of #1, etc.  You can click here to see the other 99 cities.

A blurb above the list says "We've built the ultimate, state-by-state guide to top outdoor hubs across the country."  So we're part of the "ultimate," huh?  Interesting.

The list contains other cities were we have some connections.  Naturally, Flagstaff is listed.  How could it not be listed?  Prescott and Tucson are the other Arizona cities. Stasea's hometown of Lihue is also on the list.

Actually, the list has some really laughable choices on it, especially when you consider the editors called it the "ultimate...guide."  Here's some of the laughers:  Los Angeles, New Orleans, San Antonio, Annapolis, Maryland, Spearfish, South Dakota, and the biggest laugher of all--Brooklyn, New York!  We would guess the only criteria that makes Brooklyn an Adventure Town is its proximity to a major airport with low cast fares to other "real" adventure towns worldwide.  But then again, living in Brooklyn probably involves a lot of adventure just getting to and from the grocery store.

The screen shot above this post was snatched from a local TV station.  You can click here to read their "spin" on the story.

We don't worry at all about such stories boosting our city's population.  All the "cool, hip and groovy" people keep right on driving when they come to Idaho Falls.  Why is that?  Well, for starters, there's the LDS Temple on the cityscape's horizon.  It makes a strong statement about this place.  Meanwhile, the city's perimeter in all directions is downright ugly.  The city's ringed with a hodgepodge of commercial and industrial development that creates a real negative first impression.  If that isn't enough, it's insanely easy to get lost in Idaho Falls.  Many streets change names without changing directions.  Plus, locals seem genetically incapable of providing coherent directions.  Ya gotta love a city that has TWO 25th Streets that intersect each other perpendicularly. Now that's city planning at its best.  And just for icing on our cake, there's that big place outside town with the "N" word plastered all over it--NUCLEAR!  The mere whiff of the "N" word will send a lot of "cool, hip and groovy" people running full speed for anywhere but here.

We love the above negatives of Idaho Falls.  We call it "creative population control."  There's simply no way we have to worry about Idaho Falls becoming another Durango or being all dolled up like Santa Fe or any of the other darlings of the Cognoscenti of Cool.  Nope, we're just a bunch of country bumpkins having fun in our own little enclave here while thankfully the rest of the world scurries right on by in search of the Last Great Place somewhere else.

Cheers, jp
Posted by John Parsons at 8:02 AM

Goodness! Exciting to see Shooting Star Inn mentioned under Flagstaff. Thats where my wedding reception is being held in June!