An Ode to Marilyn, Wayne and A Day's Karma 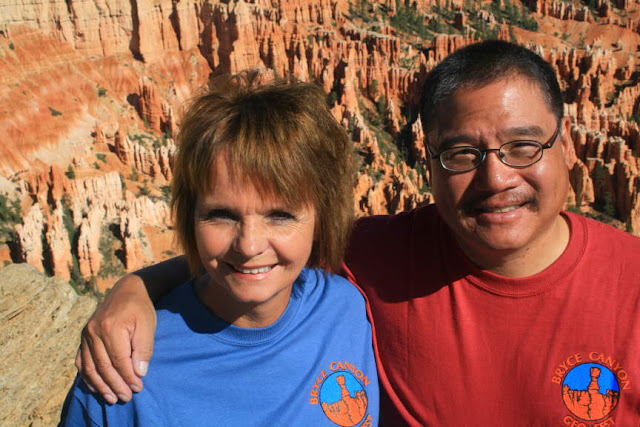 OK, here we go.  Some LBRs know the first part of the story.  It happened way back in a past life one day in 1982.  Wayne and I were returning to Flagstaff from Los Angeles via "the scenic route."  We were driving through downtown 29 Palms and saw the back of this pickup truck filled with .50 caliber ammo cans.  NEW ammo cans!  We did a fast U-turn and pulled up beside the truck.  There was no one in sight but the vision of all those ammo cans was overwhelming.  (NOTE:  .50 cal cans are a major part of river running.)  So, we decided to go looking for the owner of those cans.  We didn't know where to go so we just started walking around.  I spotted a pair of lower legs sticking from under some sort of a bush, maybe an oleander.  There were two boots on the end of the legs.  So I yelled at whoever was attached to the legs, "Are those yer ammo cans?"  And this voice came out of the bush, "Yeah, they're mine, you wanna buy some?"  Wayne was watching this process closely and he laughed hugely and turned to me and uttered the immortal phrase, "All in a day's karma." The 29 Palms ammo cans played a big part in our lives after that day, but that's another story.

Meanwhile, as our lives progressed, the phrase became a trademark of each of our own lives and also our lives as friends together.  Who knows how many times we've uttered those words to each other?  The "rules of the game" are such that we can only use the phrase at moments of true or real karma and not for mere happenstance or idle coincidence.  Students of Karma well know the difference.  So, we savor each of our opportunities to trot out that ancient phrase and use when appropriate.

So it was yesterday when a late afternoon email arrived from Wayne.  He and Helen are down (up to them) in Bryce Canyon National Park.  He's giving a lecture as a Geology Festival there. OK, so I talked with him a few days ago just before we departed for Bryce.  I told him to be on the lookout for Marilyn B. there at Bryce.  I gave him a real big sales pitch on Marilyn and told him all about her background and how we had come to get acquainted with Marilyn B. way back in yet another past life in 2001.

Let's take a minute to jump in the Way Back Time Machine and return to 2001.  Some LBRs will remember our much bally-hooed "Western Space Odyssey 2001."  We thought we were going to do a huge loop up through British Columbia.  HA!  Well, we had planned to spend one night in Kanab, Utah,  but wound up spending 6 weeks.  While there, Susun discovered the legendary Forest Service Region 4 Volunteer Guide.
One day while in nearby Escalante, I pestered a front desk person at the Forest Service Visitor Center about volunteer opportunities.  He told us the caretaker of a remote Guard Station had died and they needed someone to look after the place.  We then began hounding the officials to get the position.  We sat down with the District Ranger and he said bluntly, "OK, what can you do for us?"  We told him our background and, BAM--they had us signed up in seconds, gave us the key and told us we needed to be in Panguitch, Utah, two days later for a meeting about our new project--The Upper Sevier River Community Watershed Project.  We were signed on to do a website and printed newsletter for the USRCWP.  So, we dutifully moved into to Cowpuncher Guard Station one day and then immediately hot-footed it over to Panguitch the next day.   The meeting was a late afternoon event in the new Fire Station.  We didn't know a soul there and expected to be outsiders because the place is nearly 100% LDS.  We approached the meeting with great trepidation. The place was obviously packed with people so we knew it had to be an important meeting.  As we walked in the door, this bright beaming face caught our attention.  Marilyn B. came over and introduced herself and acted like we were long lost relatives.  She made us feel so special and so welcome we will never forget that moment as long as we live.

Marilyn played a very key role in the USRCWP and therefore we worked closely with her for 4.5 months.  We became very good friends.  Every time our paths crossed, Marilyn was always so delighted and happy to see us.  She said the nicest things imaginable to us ABOUT us!  She kept telling us how much she appreciated us and on and on and ON.  It was very humbling, of course, because Marilyn was an elementary school teacher with a magic knack of working well with children.  We visited her classroom several times and got to know that she was amazingly well respected in Garfield County.  Many of her former students were adults and whenever she needed any help, they jumped into action on her behalf.  She was building a very large Environmental Education Center alongside Panguitch Creek.  It was a hum-dinger project and yet she acted like it was a piece of cake.  She so totally impressed us in every way.

Besides all of her professional acumen, she was (is) an incredibly accomplished hunter of big game. In fact, she's one of the most accomplished hunters we've ever had the pleasure of meeting.  You would never guess that she can crawl on her belly through Arctic snow stalking a caribou or sneak around the woods to come face-to-face with moose, bear, elk, deer, you name it.  She's amazing and people say she's a sharpshooter with an incredibly accurate eye, aim and timing.

The next year, we thought for awhile we were going to return to Cowpuncher but NVUM and Sue K. intervened and the rest is history, as they say.  However, we did take a big pile of stuff up to the Powell Ranger District Office in March.  When we changed course, we had to get that stuff out of the Forest Service office.  There was Marilyn again--letting us store a mountain of stuff in her garage for five months!

We kept in touch with Marilyn as the years passed.  When I took the RSVP position, I made up a Certificate of Appreciation for Marilyn and mailed it to her with a real nice letter.  I recognized Marilyn (and two of her peers) for teaching us the value of Volunteer recognition.  Marilyn (and Allen and Kevin) really hammered home how much the words "we appreciate you" meant to volunteers.  The word "appreciate" became our most commonly used word forever after.  We count our association with those people and especially Marilyn as one of the great gifts of our lives.  They set us on the life path that took us to where we are today.  Without people like Marilyn and Sue K. we simply wouldn't be here today.  No way, no how.

Anyway, we were talking with Marilyn while trying to connect on our trip down to Arizona in 2008.  That's when we learned she had recently retired from the school and taken a position out at Bryce Canyon.  She was SOOO excited about working at Bryce.  You would have thought she was starting her life all over again.  The joy in her voice was akin to what you hear from someone who just received their bachelor's diploma.  She had all sort of ideas and to her it was a great big blank palette waiting for her to apply the colors of the rainbow.

That's why I somehow knew that Wayne's path was destined to cross Marilyn's path.  Well, obviously, it did and Wayne took Marilyn's photo with the Park's Chief of Interpretation.  Marilyn is in charge of Education for the Bryce Natural History Association.  Then Wayne emailed the photo to me and it sure caused a huge wave of emotion to wash across our souls.  Susun and I were so happy to see Marilyn's photo with such a beautiful backdrop.  We can only imagine what an enormous positive impact Marilyn is having on Bryce and its visitors.  We have no doubt whatsoever that she will leave the place better than she found it.

Wayne didn't say much in his email, just: "We did meet Marilyn and she is great - just as you said. She sends her greetings to you both."  Yeah, Wayne, all in a day's karma!

Wow! Fantastic. Thank you, thank you. Awesome story and writing.