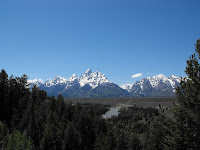 Togwotee Pass was far more beautiful than either of us dreamed it could be. The beauty just went on and on and ON! There's a developed overlook that dates to 1965 on the west side of the pass. Here's a panorama taken from the overlook. It's far more spectacular than any photo can depict. The top of the pass itself is still a huge snowfield--so much snow that it would be a great place to snowshoe right now or x-c ski, for that matter. Water is gushing everywhere--all the streams are near bankfull and running muddy. Most of the Forest roads are still closed because of the heavy snowfall this past winter. Wyoming's water situation is the best its been in years. Click on either photo to see a larger version. The small shot was taken from where we Twittered yesterday. Ansel Adams made the place famous with one of his legendary black and white shots decades ago.
Posted by John Parsons at 12:23 PM

I found a marked map that showed a family trip in the late 60's
The route went thru Dubois and over Tog pass. We camped near the pass - I thought on the West side, but maybe on the East. Tho it was summer, I remember the night being cold - because of the altitude, I suppose.We saw lots of spectacular scenery on our trips and I'm sure that this pass was one we stopped to look at.I have thousands of Kodachrome slides, so I'll have to see if I have any of this region.
Dave E.