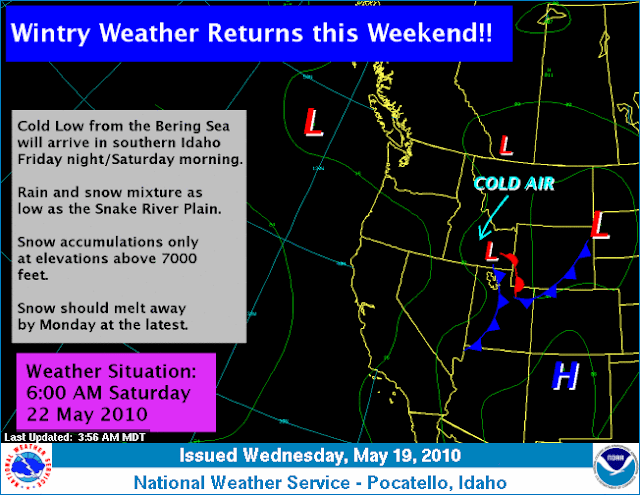 The NWS now creates interesting graphics to visually depict forecast highlights. Some NWS offices call it "TV Weather." The graphics are actually a welcome change to the "same old, same old" NWS. As you can see, the above graphic shows what is predicted about 48 hours from now--6 am Saturday morning. That's when we will be crawling out of our tent (hopefully warm and dry) and beginning to set up the interview site at Baumgartner Hot Springs. Normal people would not be planning to stand in the same spot for six hours in this kind of weather. We're doing it because it's all part of the NVUM "bargain." As Dear Friend and LBR Brad says, "If you're in it for a dime, you're in it for a dollar."

Check this excerpt from the Boise NWS AM Discussion:

We're running very behind this morning as it near 7 am. We've already pushed our departure back to 10 am and it will probably be even later than that. We haven't even started packing the truck yet. Also, we have to go back to at least one grocery and probably two groceries because of stuff we forgot last night. It was so windy, I think it blew away some of my common sense.

I got a call from RJ late last night, danged near 9 pm. He showed his "bossy" side and I think we're finally getting a glimpse of the "Real RJ." The upshot of the phone call was that it definitely planted major seeds of doubt in my mind as to whether we will do any more NVUM past those interview dates already scheduled. As we've said many times before, we have to REALLY like this guy in order to do this sort of work. The "like" part of that equation took a big nose dive last night.
But, it's all good--that would give us more time this summer to use that new boat we bought yesterday!

I will be switching the Twitter feed back to the top of the left column. We update it primarily for those family members and friends who like to know the "latest" as far as a trip goes. This time, we promise to update it on the far side of the trip when we get back in cell coverage.

We won't be returning until quite late next Wednesday. We thought we'd be home by noon but it's going to be probably 7 pm or later. Blame it on some new "rules" laid down last night by RJ and you can probably get the drift of why we most likely won't be doing this again after our June 6 interview. We thought we'd be back home on June 7 in time to attend the monthly P&R meeting. well, that won't be happening either. In fact, we won't be returning on the second trip until probably 8 pm that Monday. So, we're going to enjoy these upcoming episodes for what they are--a highly intriguing but brief interlude in our year.

I need to get moving right along. I will probably add a note here at the end of this blog post about an hour before we leave. If you're wondering where the three previous blog posts went...they were moved to the Google Site that augments this blog. There's a link to that site at the bottom of the left column.

Cheers! jp
Posted by John Parsons at 6:58 AM

where r u guys? I'm not liking no posts here!! Call when you can..